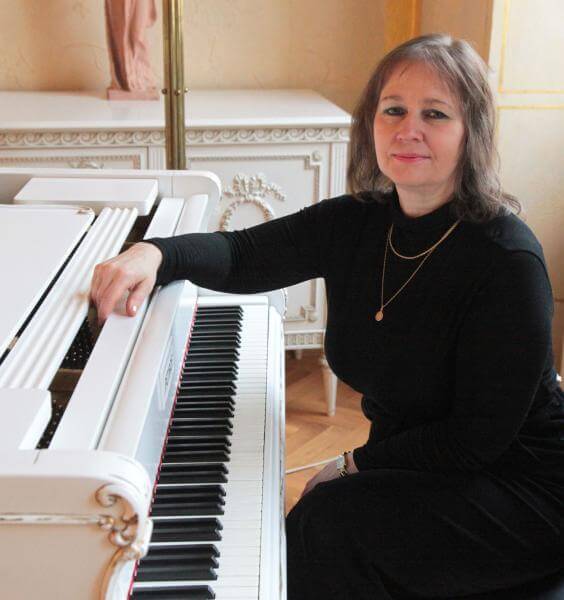 Zuzana Ambrošová began her conservatory studies in Košice at the age of 13 as an exceptionally talented child. She graduated from piano playing at the Music Academy of Performing Arts in Prague under the supervision of Prof. Zdeněk Jílek (piano class) and Prof. Jan Panenka (chamber playing). For the period of one year she received private lesson by Lecturer Valentina Kameníková. She also extended her studies by taking Master piano courses in Weimar, Germany.

At the age of 16 as the laureate of the Smetana´s piano competition and the international competition Beethoven’s Hradec she became a solo artist in the State Philharmonic Orchestra Košice, which she later joined again repeatedly. As a solo artist she made a successful appearance with the Vienna philharmonics. She taught piano playing at the conservatory in Košice for ten years and performed in various places in Slovakia and abroad at the same time.

In 1992 she started working at the Prague Conservatory and engaged in external cooperation with the Music Academy of Performing Arts in Prague.  Since the late 1990s she has worked at Jan Deyl Conservatory and Neruda Grammar School (presently The Prague Grammar and Music School).

She is a highly demanded chamber player and has been repeatedly invited to cooperate at some international festivals and competitions (Prague´s Spring, Talent of the Year, Ameropa). She has performed at many concerts and festivals in Slovakia, Germany, Hungary, Austria, France, Italy, Holland, Luxembourg, Spain, Croatia, Switzerland, Bulgaria and Norway. She has had concerts at various prominent stages around the world such as Dal Verme theatre in Milan, Sala Silentium in Bologna, Sala Caselle in Roma, Ville Bardini in Florence, Palazzo Tobia in Genoa, Maison Cantonale Bordeaux Bastide, Oratoir du Louvre  in Paris, Memorial Hall in Phoenix, Kerry Hall in Seattle and many others.

She keeps returning to many festivals and stages. In 2016 she finished a very successful tour through the USA. She performed in Arizona, Washington, California and Nevada and gave concerts in Phoenix, Seattle, San Francisco, Los Angele and Las Vegas. In March 2018, due to the repeated requests, she is going to perform in these cities again and extend the tour by adding concerts in Little Rock and New York. She closed last year up with Christmas concerts in Italy, France, Luxembourg and accepted invitations for the following seasons in Turin, Livorno, Pisa, Bordeaux and Luxembourg. This year she is planning to perform in Croatia, Slovenia France, Germany and Italy.

She regularly makes various recordings for Czech and Slovakian radios and televisions. She recorded a CD Il Vrituoso together with the violinist Miroslav Ambroš, which was published at Arco Diva.